Hong Kong has almost 550, London 30, Warsaw 11, and neighbouring Vienna three. According to the Council on Tall Buildings and Urban Habitat (CTBUH), Bratislava will become the 201st global city to have a skyscraper, i.e. 150+ metres, which EUROVEA TOWER will achieve this week with its 44th floor. Its total height will be 168 meters after the completion of shell construction in November this year.

Construction work on EUROVEA’s extension by developer J&T REAL ESTATE (JTRE) began at the end of 2019. At the beginning of 2020, four rigs began to drill almost 1,400 piles into the building foundation’s construction pit, and the first of 14 cranes towered over the site in May. A key date for the skyscraper construction arrived in September 2020, when the base plate was concreted over three days, while the façade’s extreme weather resistance was being tested. The skyscraper then began to take shape, and after the base with 15-meter V-shaped support columns was completed, floors have been added at an approximate rate of one every 11 days.

At the beginning of 2022 the EUROVEA TOWER shell building was just over half its final height, it broke the symbolic 100 metres barrier at the end of March, and became the tallest building in Slovakia in June. Coming days will see the 17.4-meter skyscraper crown - the heaviest part of which weighs 4.7 tons - take its place, comprising 12 two-part beams. In October the metre-thick ceiling slab on the highest 45th apartment floor will be concreted. The current floor number is updated on a digital display from the scaffold, and progress on this exceptional building is also being followed by a documentary film by award-winning director Jaro Vojtek.

"The construction of Eurovea Tower and the extension of Eurovea is on schedule, despite on-going construction market challenges. This progress is thanks to thorough preparation, high-quality project documentation, and the professionalism of all contractors. By the end of November, the skyscraper should receive its crown and therefore highest point. We are already seeing a positive response to how the tower positively disrupts the hitherto monotonous panorama of same-height buildings. Upon completion, its slender rounded silhouette will stand out as a sleek and contemporary landmark of Bratislava."

This inaugural Slovak skyscraper will deliver four hundred stunning residences with practical layouts, high ceilings, excellent quality of fittings, and each home has a terrace with a clear and unique view of Bratislava. Residents will also have an entrance lobby with a reception, and direct covered access to the adjacent shopping centre for all their needs.

“The opportunity to live in Slovakia’s first skyscraper immediately generated huge interest. This was thanks to the unique project, excellent Danube location, and being just minutes from the Old Town. Almost 90% of residences have already been sold, with the remainder to be released for sale when the building has been completed."

In addition to the skyscraper, the EUROVEA 2 project also includes EUROVEA shopping centre extension, RIVERSIDE residences, PRIBINOVA X, PRIBINOVA Y admin buildings, and the underground garages. The construction at EUROVEA CITY also encompasses extending the Danube waterfront promenade, the construction of Pribinova boulevard in preparation for the tram line, and additional new public spaces, playgrounds, and sport areas. The square between the skyscraper and river will be supplemented by Octahedral Body by Viktor Frešo - this new visual art-piece was selected by an expert jury from 25 proposals by Czech and Slovak artists as part of a public competition. EUROVEA CITY will soon become Bratislava’s pulsating and thriving contemporary city centre. 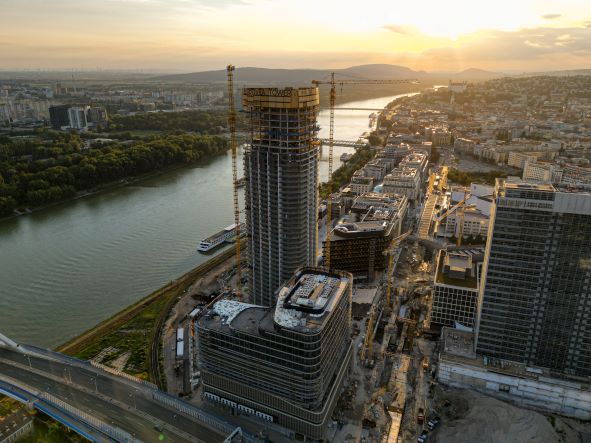 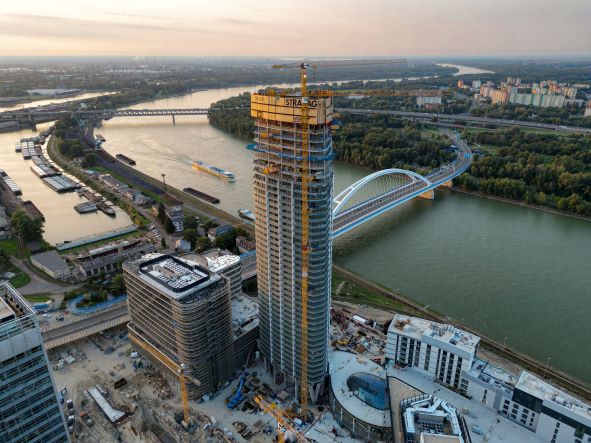 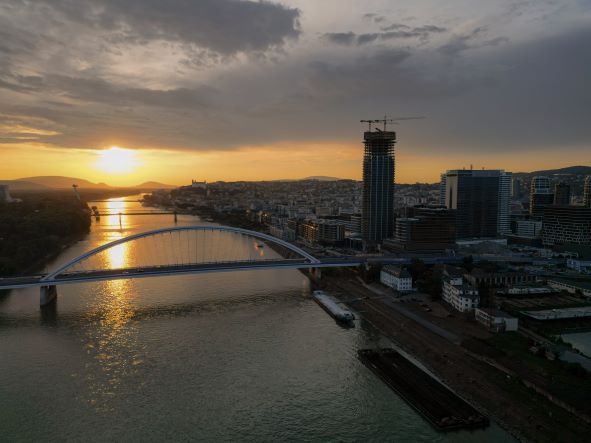