The state-of-the-art winery building is partially submerged into a slope to naturally complement the region’s lush rolling countryside, which is on the UNESCO World Heritage List. The form of the building is rooted in a desire to create a structure that simultaneously looks both inwards and outwards, providing an efficient space for wine production, while engaging in dialogue with the surrounding landscape.

Le Dôme was founded as a premium Château Teyssier brand by award-winning winemaker Jonathan Maltus. He arrived in the Bordeaux region 25 years ago as one of the first generation of Garagiste cult winemakers, and was the first Englishman to receive 100 points for his wine from leading critic Robert Parker. He was awarded an OBE by Queen Elizabeth II.

“When Jonathan Maltus first approached us, he expressed a desire to create a distinctive new winery, set against the unique backdrop of St Emilion. He wanted the building to be a celebration of the beautiful site, focussing on the views of the vineyard and making the landscape the primary protagonist in the design. The idea was to blend the building with its surroundings while creating a welcoming space for visitors and wine enthusiasts.”

“When I first met Norman Foster in Madrid we spoke for over an hour and a half about what we required out of the project. Norman’s energy and personal interest shone when he, there and then, sketched the basic design of the building that has manifested itself so brilliantly in real life. What we see now, and it gives us so much pride, comes directly off the page that he drew in his notebook in front of me.”

"In addition to our first London project and previous international engagements, our cooperation with Foster + Partners and Jonathan Maltus has been another rewarding experience. We warmly embraced the challenge of this project which is located in a traditional French wine region, and we were delighted that the new winery was so warmly received upon opening.“

Visitors approach the winery along a tree-lined avenue, at the end of which is a circular-plan building. A combination of two ramps – one external to emphasise the relationship with the site and the other internal, allowing the visitor to walk through the different stages of the wine process – gives the new building its spatial definition. Both ramps lead up to a gallery on the upper level which forms the social heart of the building with tasting tables, an elegant wine bar and entertainment spaces – all wrapped by 360-degree views of the adjoining vineyards.

The architectural and industrial design teams at Foster + Partners worked closely from the outset to create an interior design solution that is an integral part of the architecture. A curved wine bar looking out onto the vineyards alongside circular tables forms the tasting area to the left. A circular atrium allows people to look down onto the wine production and storage spaces below, providing a holistic and unique experience for visitors. To the right of the entrance, discrete office pods help create space for focussed work within a busy environment. The timber screens wrap around the desk spaces to allow for acoustic and visual privacy while preserving sightlines to the outside and blending in with the architecture, with the lines in the ceiling reflected in the timber screens.

The 40-metre diameter timber roof is a unique reciprocal structure consisting of mutually supporting sloping beams that spans over large column-free space. The structure naturally creates a 6-metre-wide oculus at its centre, which allows daylight to flood the upper level. The roof is clad with recycled local terracotta tiles, while the base of the building – made with concrete using aggregate from the region – is covered with timber slats and partially buried into the ground to reduce its visual impact on the terrain and increase thermal mass performance. The building to reinforces the landscape by creating a hill-like form that echoes the gentle slopes that surround it.

Construction of the new winery began in October 2019. The 1,800 sqm building is sensitively located in a vibrant vineyard that covers over three hectares. 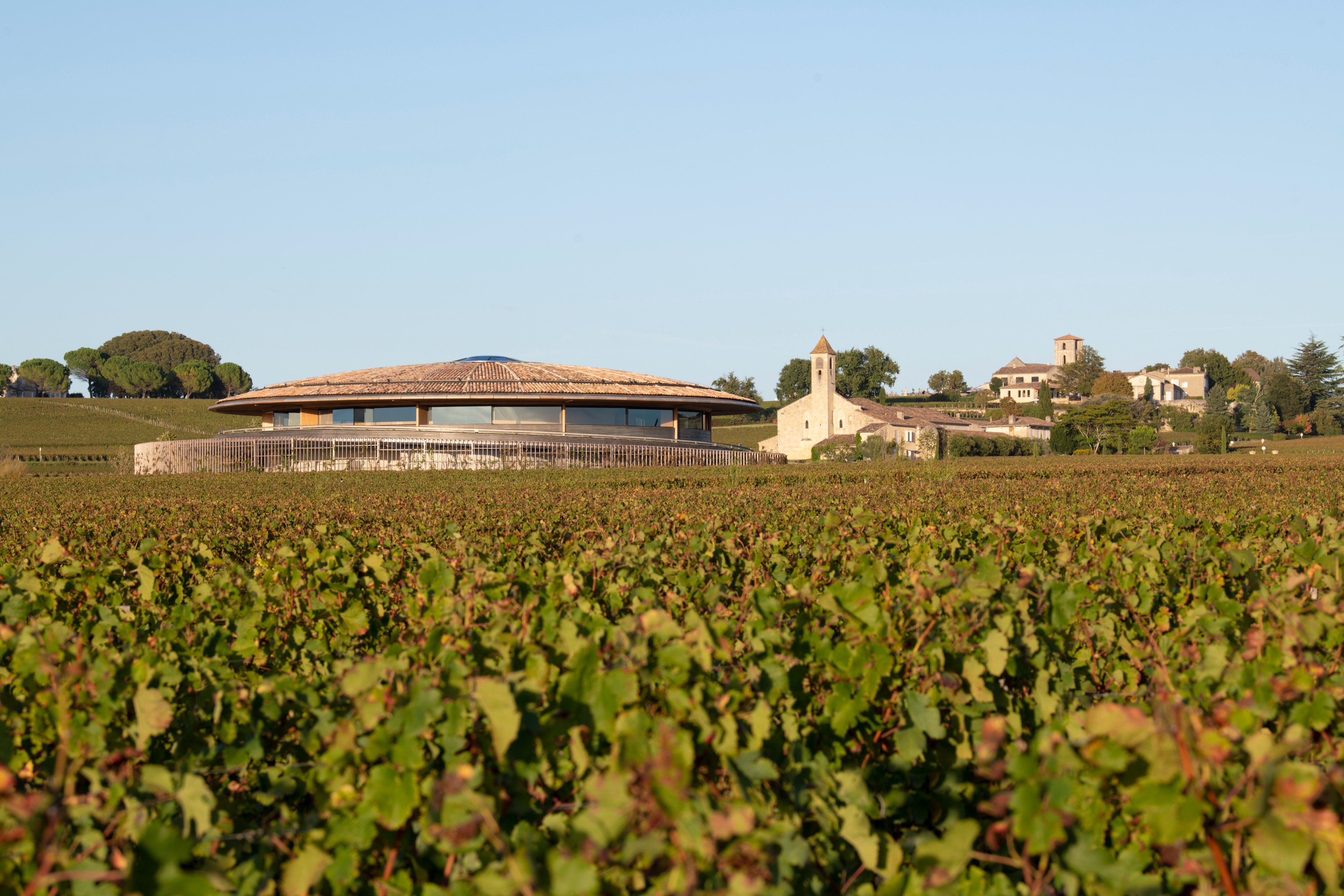 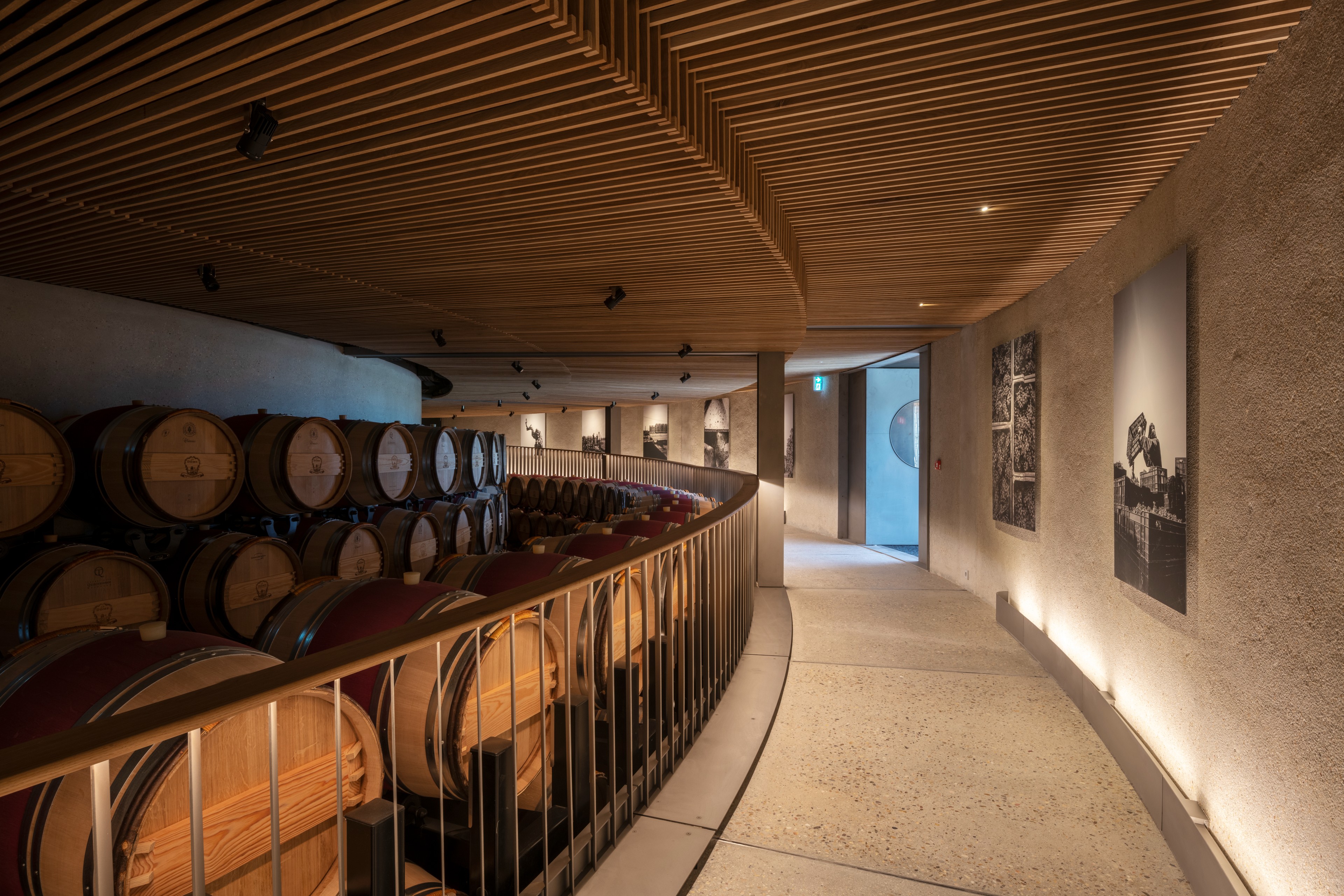 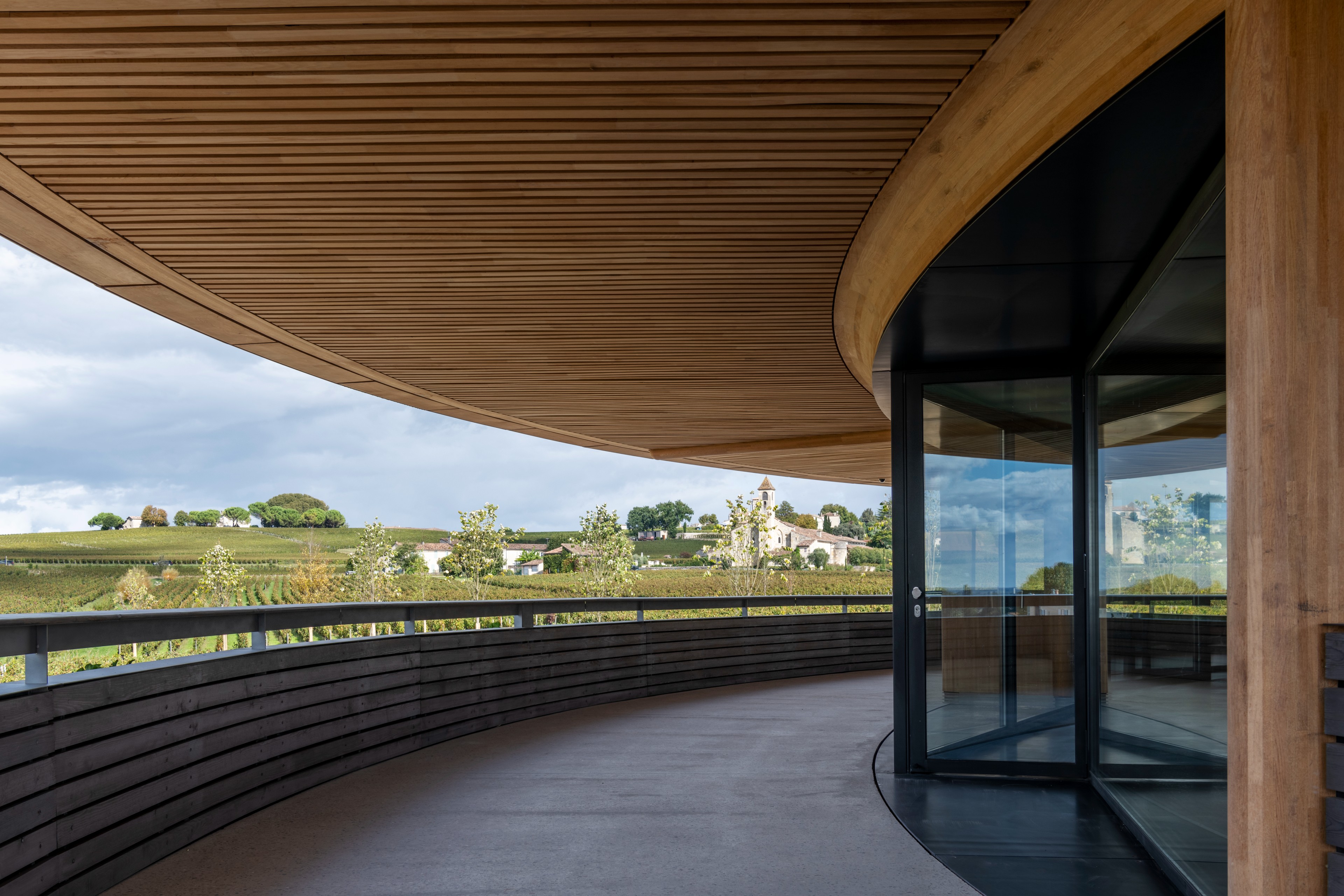 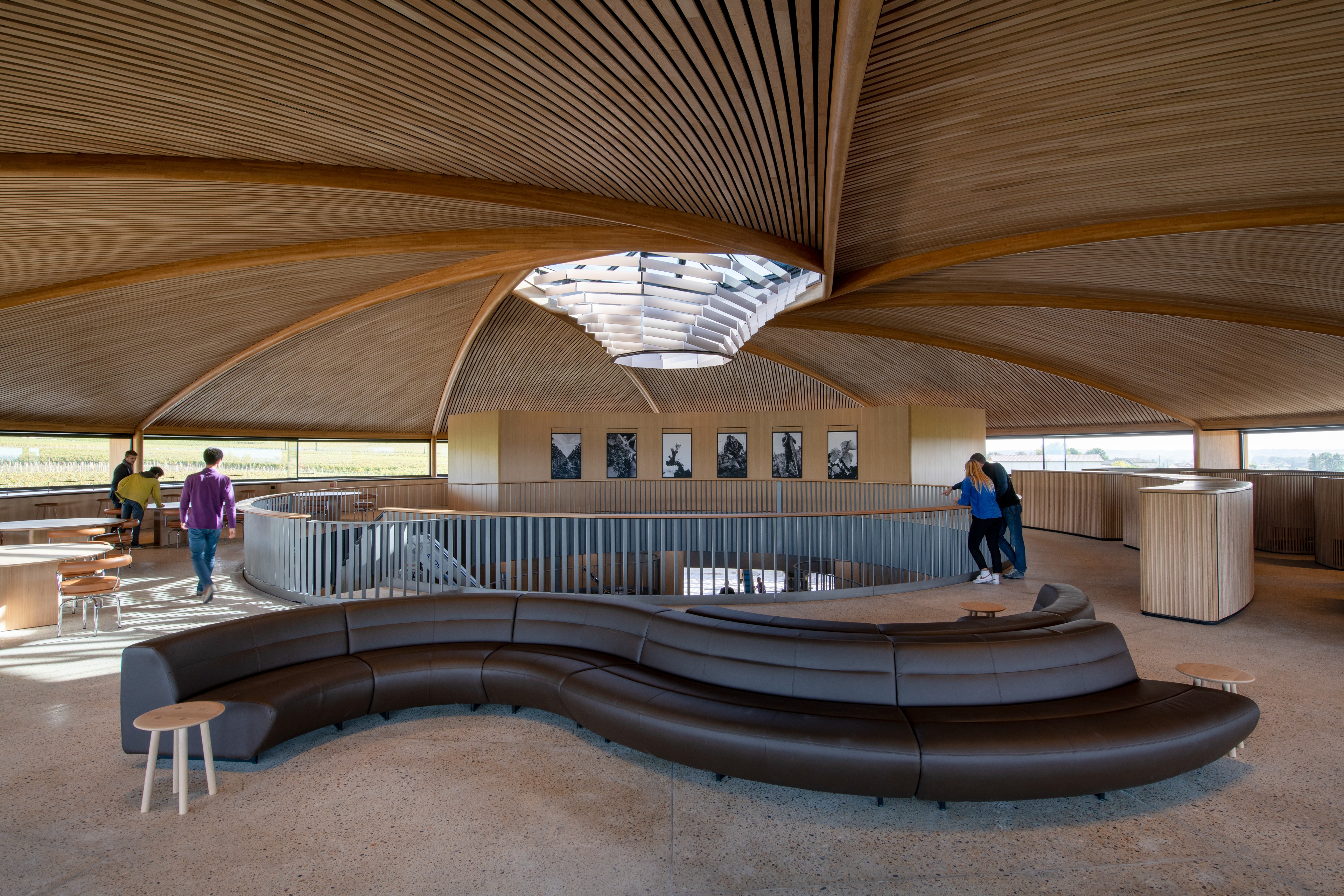 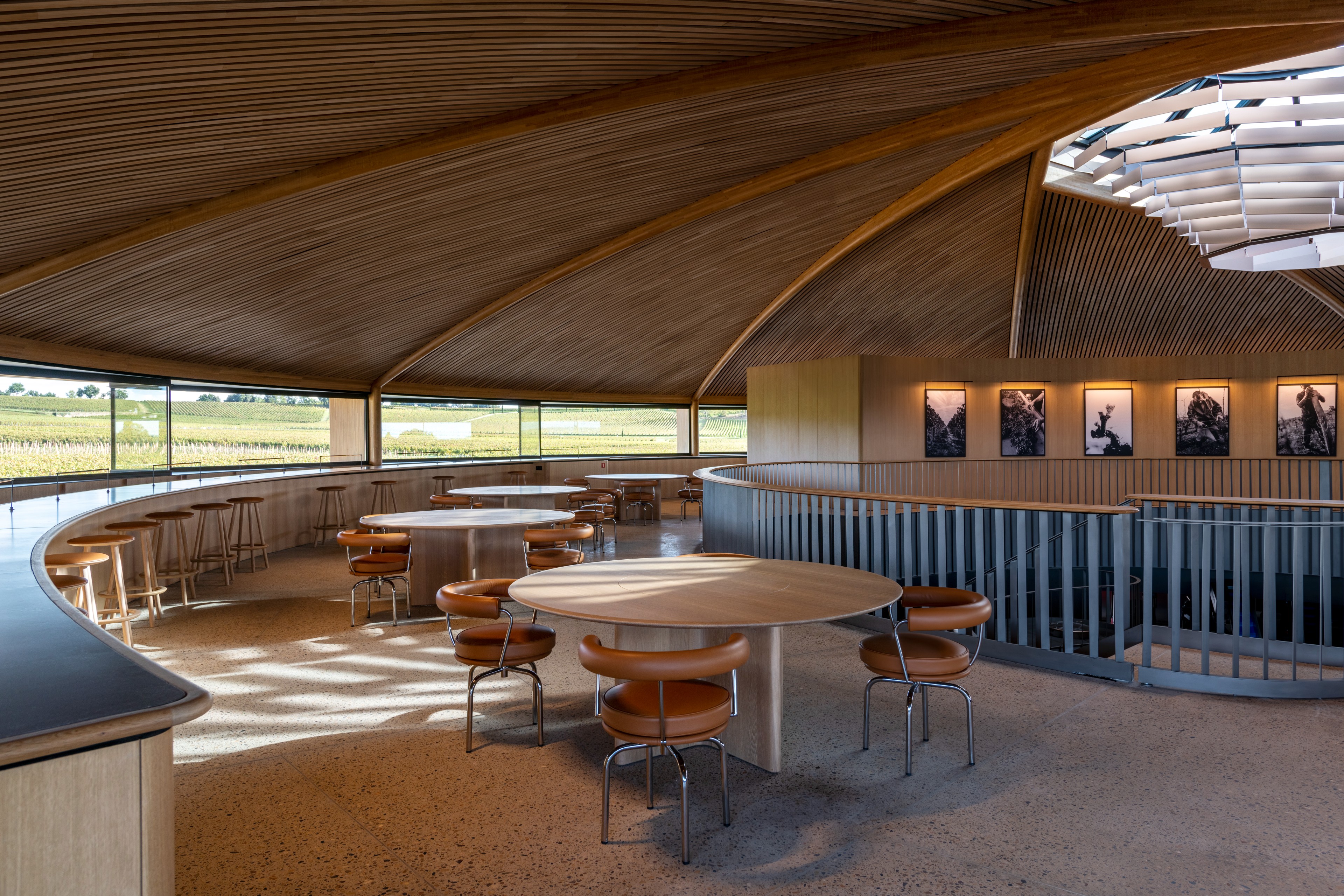 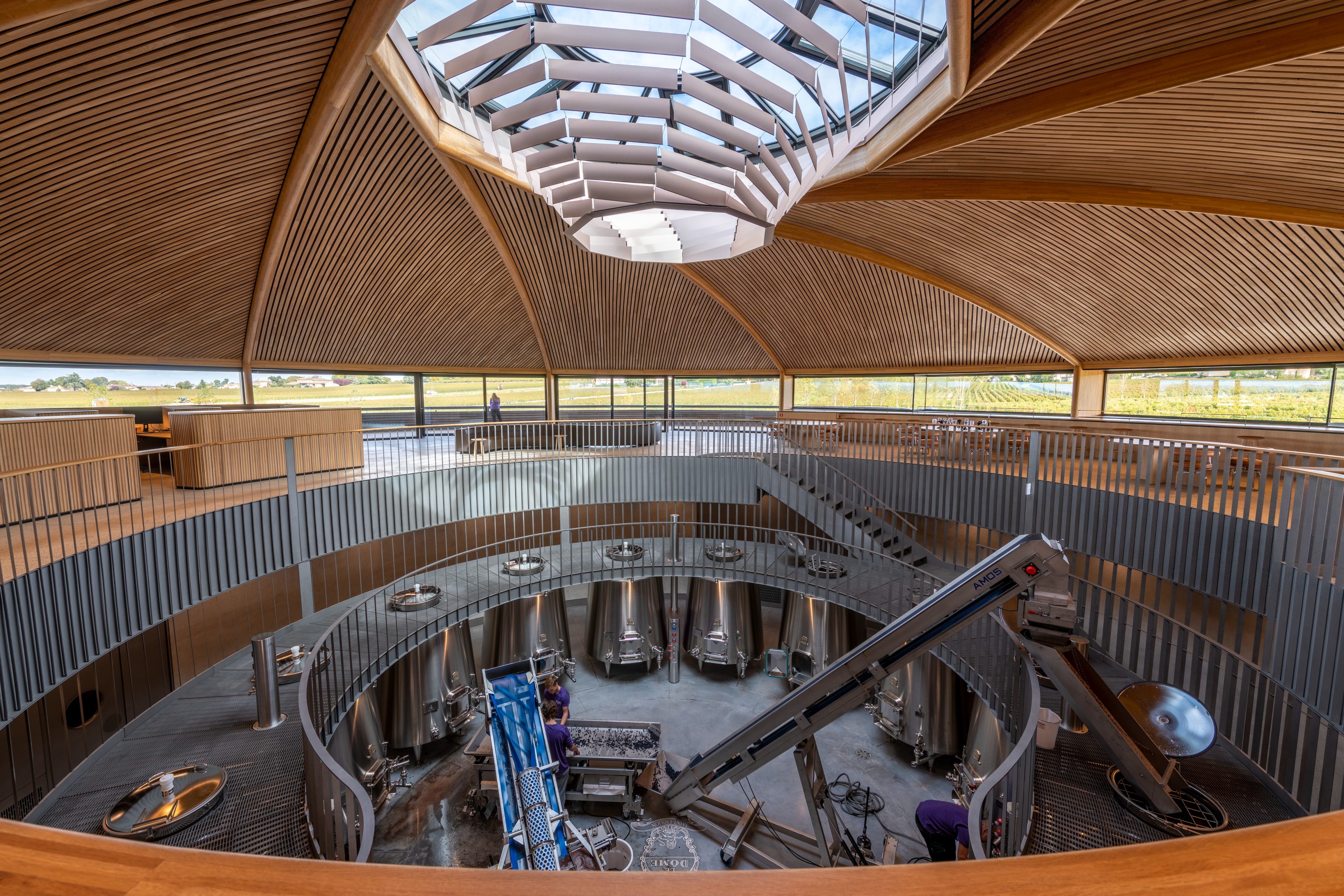 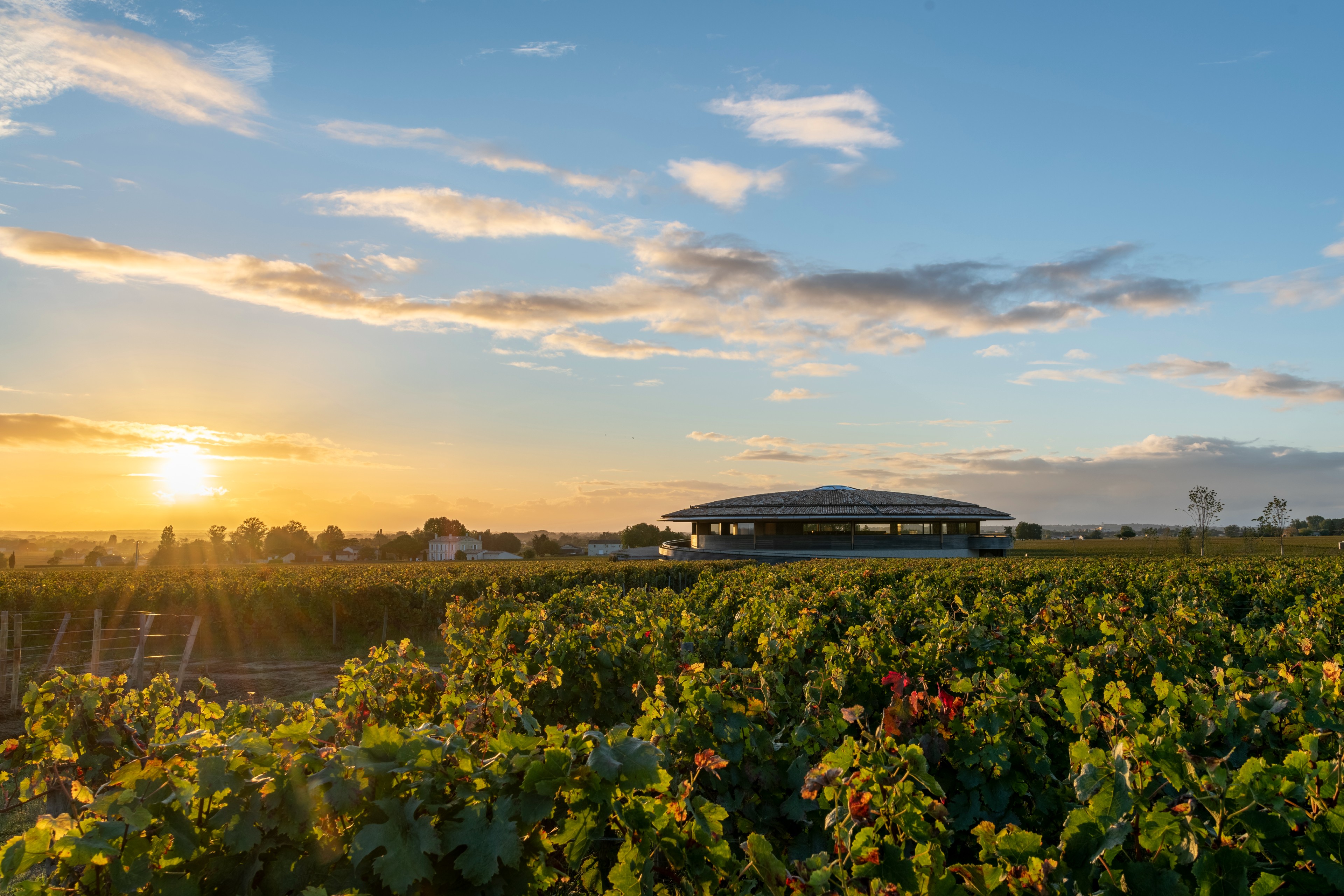